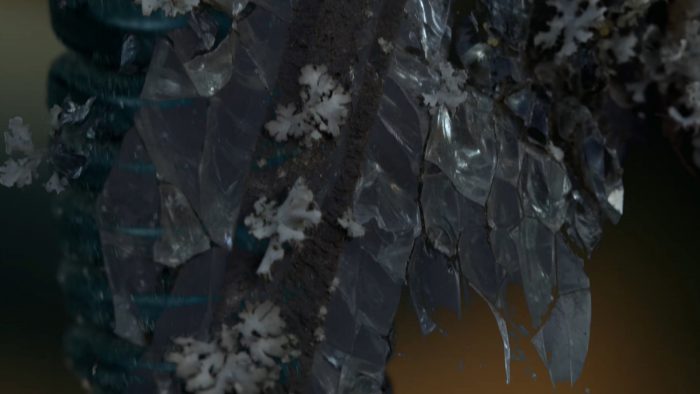 Are we able to stop the climate-catastrophe, or should we accept its inevitability? Should we perhaps familiarize ourselves with the idea that – in a constructive interaction with machines and artificial intelligences – we in a way need to overcome the ideas about the presently known forms of human existence – about its sanctity, the duality of body and soul? What are we to expect once we surrender, and our life-spaces are forced underground, for we could not stand the heat of the surface anymore? Will we be able to update and rethink the actual concepts of humanity, so to survive this new era by transforming ourselves into something altogether different?
Szabina Peter and Kristof Janos Bodnar (blanche the vidiot) composed a video inspired by Janos Afra’s poem Sky Sear contemplating on similar questions by means of contemporary poetry and video art. The lines of the poem appear both visually, and are heard on distorted, posthuman, hardly intelligible voices, “performed” by AI’s. Through these techniques aimed the creators to depict a dystopian, fragmented reality – no longer capable of being united. We only could hope that such an ahuman, postapocalyptic situation will not become dominant even in our lifetime.