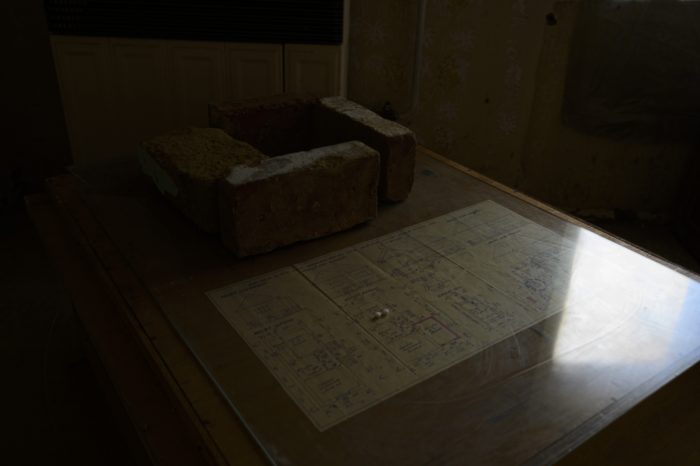 We are perpetually amidst a flux of sounds – outer and inner, personal and learned, private and public ones – that form us and which are formed by us. The milieu of the artcolony and the village as a venue and as a vision can be grasped through similar dualities. The movement on the verge of such dualities – to name a few: the local as site specific thus capable of showing the general; as perpetually reflecting on the past, at the same time as understood in the lights of the future – generates the continuous oscillation that is the backbone of our artworks: Blueprints.

Taking these dualities and multiplicities as our starting point, our pieces focus on the following questions: On the one hand, what is the space of a sound, of sounds? This could be understood as the spatiality appearing in the realm of physical or psychoacoustic perception. It also could be experienced as a stream of sounds dialogizing or monologizing with each other, or as the spatialization of the polyphony in a semantic sense; also in the sense of the experience of being in the borderline of objective perceptions, feelings, emotions and subjective states. How do these things come into existence? How does the polyphony of sounds spatialize and find its place in the unity of creation and reception – the polyphony of past, present and future; of the poem and singing; of the ordinary and the limit-experience; of the children and her who remembers; of the stranger stepping into the space?

On the other hand, what is the sound of a space, how can we give a sound to it? In what sense, in what form can a space – in our very case: a lonely, leftover one – preserve sounds, voices? What sounds and voices are the space of meanings, reception and creating seeking for themselves? How is it possible to intervene the space (emptiness) and the sounds, the waves (form)? How can we gain experience from the sounds by means of vision – and vica versa? How are the voice and sound capable of transcending the text? Is the sound and the measure of a micro-environment capable of mapping the global – is there a connection, and can it be articulated by artistic means, between the most minute, intimate and the grandest, the most remote? What is the measure of remembering, of giving voice to something, of the smallest space lived or abandoned, and of the route of connection between all of these things?

A house – uninhabited for two years – with traces of leftover life, frozen time: the ones we forgot. The textual part of this video gives a kind of “sound body” to the void created in the space, although the poem itself does not “write them into the space” by naming life forms, materials, persons. It rather gives names through privative suffixes, abduction, disappearance, and forgetfulness as an act. The subject of these activities (sometimes the people themselves) is formed by her own departure. The room is a panopticon of the traces left behind, such as the leftover sounds, and the conquest in the space created by the departed.

The work can be considered as a walk around the blueprint of a woman’s body, a drill under her contours, an viviseciont of the different states of the women’s house-women’s space (age, place and materia), creating a kind of constantly present panopticon.

The 10.3 video- and sound play is a state of transmission, a continuous, uninterrupted transition and return from empty to “full,” from immature to mature, from game to freezing reality, from laughter to “breaking” or to tragedy — from little girl to young woman. The well and the confessional cabin rumble the sound, muffle the speech, so the laughter of the game blurs into the cry, than a stream of prayer responds. Women’s spaces come to life and go under glass.

The prelude to the sound play was a self-directed regression process in which I (Kinga Tóth) spent 12 hours in different states of mind between waking life and sleeping, recording these states by handwriting and an audio-recorder, in complete darkness and “other state”. As a consequence, at the end of the process it was unclear even to me which recordings were successful, and what is their content at all. On my inner journey, I find the last room, going through different stages of my life in similar states (surgeries, anesthesia, especially stunning conditions at hospitals and wakefulness, memories), so to arrive at the last room, which has not been revealed so far, where no one and nothing else is waiting, just myself.